Although not so popular among tourists as the other European cities, the capital of Slovakia is also an interesting point on the map of Europe. Some people say that it is more vivid at night than in a day – because of some clubs, pubs and other places where young people meet to have fun. But it is also worth seeing in a daylight.

This city is placed near the western border of Slovakia, so it has direct contact with Austria and Hungary. Th 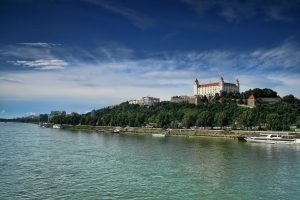 at is the world phenomenon. Years ago that place was important in context of international trade. Since 16th century Bratislava was the city with a great meaning for Hungarian rulers. In the next centuries the city was growing. It was fortified and encompassed with walls, but today only one city gate – the Michael’s gate and a castle remind those times.

A nice walk in the city

It is easy to see all the important and interesting places at the weekend. Walking along narrow streets and looking around is a good way. At the beginning, the old city should be visited. Charming town houses and Old Town Hall are worth seeing. In the streets some sculptures can be also found. Visitors always take photos of Čumil. It is the figure of a worker, poking up from the manhole. Another interesting sculpture is the figure of Napoleon’s Army Soldier.

The castle over Danube

During the visit in Bratislava, the castle cannot be omitted. It is located on the hill, hulking over 80 meters above the river. It is not the original building, which was built in 11th century. During centuries, it was rebuilt many times. The actual version was built in 20th century. Now the historical museum is placed inside. From the hill the wonderful view over the Danube River can be observed.

Among all the churches, St. Martin’s Cathedral is where the coronations of Hungarian rulers took place. The peak of its tower is decorated with the crown of St. Stephan. The cathedral represents the Gothic style. Another intriguing 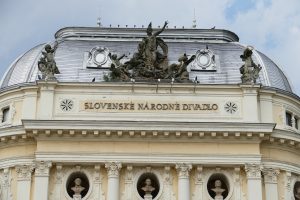 sacral building is The Church of St. Elizabeth. Its secessionist character is an example of Hungarian architecture. The dominant colour in that church is… blue – even the benches inside are in that colour.

People often connect Slovakia with trekking in Tatra Mountains and small, peaceful towns. But it should be remembered, that for years its capital had a great political and commercial importance. Now the traces of its brilliance can be admired by visitors from all over the world.